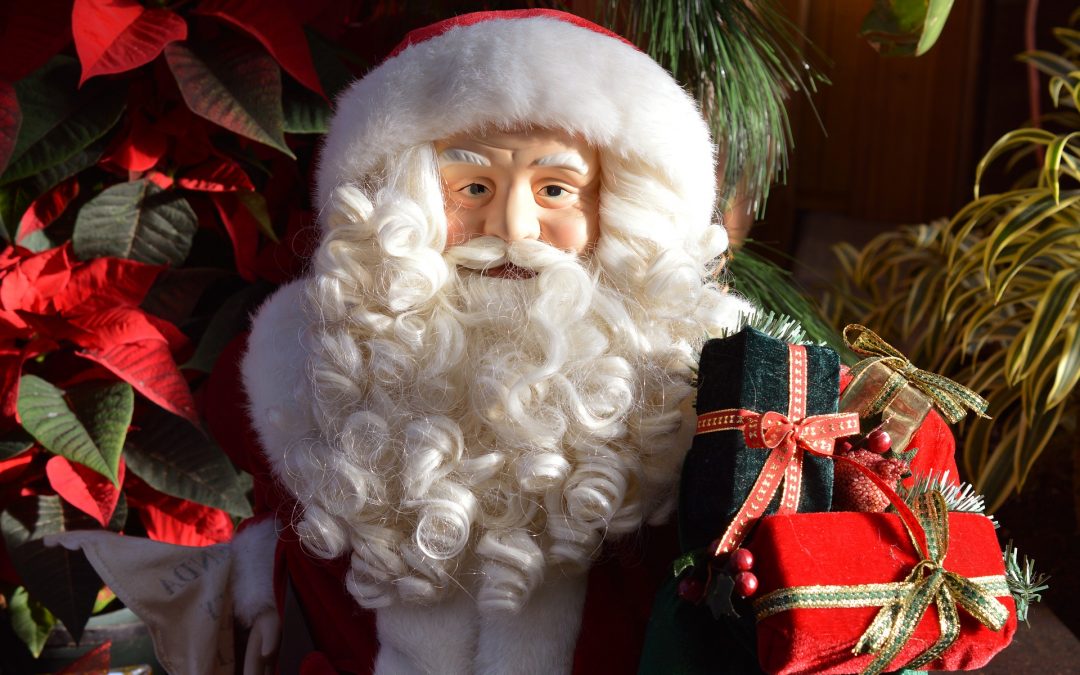 I have been watching a tired Santa Claus each time I passed a mall, this week, as he tries to shorten the long line-up of parents and their children, wanting to pose for a picture with him.

This Santa, certainly not an omnipresent being, as parents untruthfully tell their children, is obviously tired. His flushed face tells a story of a exhausted man, who barely speaks, have difficulty getting up from the lengthy slumping on his spongy sofa seat, and somehow must be hoping for the hours to disappear quickly. Another day done; another day’s pay.

Is he comfortable in that red suit? How about that long white wig and false beard he’s wearing? This Santa has been there for the past week – maybe for seven days a week. I don’t pass that mall everyday, but certainly I see him during week days. Is it a different person playing Santa?  I can see easily the same posture on that sofa every day, and the flushed face, too. I believe it is the same person.

The parents don’t seem to care about his ability to pose (without a smile, as this Santa is not wont to smile); all they are interested in is to have their children sitting in the lap of “Father Christmas,” for a picture that will hang in their living rooms or in their children’s albums. We hope when they become of age they will forgive their parents for telling them a big lie. Not all the children seem to be keen on taking a picture, for some scream; yell, cry, and what have you and would prefer to be in the arms or hands of their mothers.

There are bystanders watching. They like to watch. Each time I passed by, there are always onlookers, watching the cameras flashed, and the attendants sometimes trying to quiet the children. Once that picture is taken, you see credit cards swiping/tapping or cash being drawn from pockets and deposited in cash drawers/registers (if they still use that name). The attendants are smiling because they are making money. After all, isn’t Christmas about the money?  Jesus Christ was never born on December 25th; the pagan gods were born on that day. How can this day pay homage to the King of all Kings, the incarnation of the Saviour of the World, who hates idolatry?

I pondered this question at one time when I was passing Santa. Do parents think about what they are doing when they tell their little ones the reason for them sitting with the man in red? Can they truly tell them (with a conscience and don’t feel guilty) that they are celebrating the birth of Christ? What does this figure have to do with the birth of Christ? In fact, when you tell your children he is coming down the chimney or to the house on Christmas Eve bearing gifts, aren’t you telling them Santa is everywhere at the same time – omnipresent – an attribute that belongs to the Almighty God alone?

Somehow, my bleeding thoughts had a bit of sympathy for this particular Santa. He’s an elderly man and needs his rest. If he gets minimum wage for posing or a reasonable wage, I wondered if he was enjoying his job or he was just part of the big commercial exercise that this man-made holiday represents and certainly not the birth of our LORD and Saviour Jesus Christ. We look forward to that day when “the earth will be filled with the knowledge of the glory of the LORD, as the waters cover the sea,” Habakkuk 2:14.  Indeed, God says, “my people are being destroyed for the lack of knowledge.” Poor Santa! If you would like to know more about God’s true festivals in the Holy Bible download FREE, our booklets GOD’S SEASONAL PLAN and FACTS YOU SHOULD KNOW ABOUT CHRISTMAS.