The Abomination of Desolation; is it just around the corner? 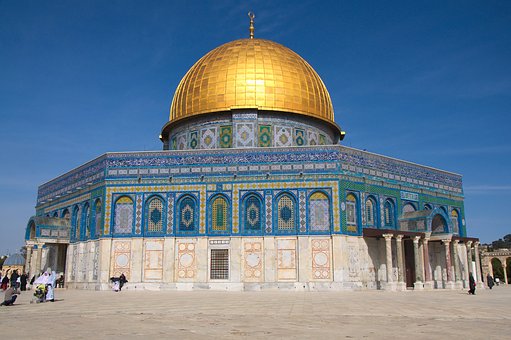 Around the year 167 BCE, the ruler of the Seleucid Empire, Antiochus Epiphanes, committed a terrible and horrendous act. It was not that he didn’t commit many atrocities in his eleven year rule of the empire, but this one was different – very different.  This one was sacrilegious; it was against the Most High God.

Antiochus, also known as Antiochus IV, and son of King Antiochus III, the Great, set up an altar to the Greek god Zeus, in the Jewish temple in Jerusalem, and sacrificed a pig on it. Yes, an unclean animal.

In 168 BCE, King Antiochus, after several victories in Egypt, returned to his land with many riches. Undoubtedly, he felt like an invincible leader.  He had his eyes on Jerusalem where the Second Temple, built by Cyrus the Great around 349 BCE, was still standing.

The Book of the Maccabees tells us: “When the soldiers entered Jerusalem, their commander spoke to the people, offering them terms of peace and completely deceiving them. Then he suddenly launched a fierce attack on the city, dealing it a major blow and killing many of the people. He plundered the city, set it on fire, and tore down its buildings and walls.”

It continues:  “Pagan sacrifices were offered in front of houses and in the streets. Any books of the law, which were found, they tore up and burned, and anyone who was caught with a copy of the sacred books or who obeyed the law was put to death by order of the king. Month after month, these wicked people used their power against the Israelites caught in the towns. On the twenty-fifth of the month, these same barefaced people offered sacrifices on the pagan altar erected on top of the altar in the temple.”

This was an abominable act against the God of Abraham, Isaac and Jacob. Interestingly, King Antiochus had no idea that he was fulfilling a significant and important part of the prophecy by the Jewish prophet Daniel who wrote in Chapter 11 : 31 of his Old Testament book. “And forces shall be mustered by him, and they shall defile the sanctuary fortress; then they shall take away the daily sacrifices, and place there the abomination of desolation (or the abomination that makes desolate).” There’s hardly any doubt in theological circles that Antiochus fulfilled this prophecy.

His abominable acts also paved the way for the ultimate destruction of the Second Temple in Jerusalem, in 70 AD, when the Roman military leader Titus brought in his army and destroyed the city – yet fulfilling another prophecy.

When Jesus Christ was giving a warning about His return to earth in his second coming, in Matt. 24, he alluded to Daniel’s prophecy, and how it would lead into a time of Great Tribulation. From all indications, Daniel’s prophecy is dual, and a forerunner to another abomination of desolation, shortly before his Second Coming.

“When you see the ‘abomination of desolation,’ spoken of by Daniel the prophet, standing in the holy place (whoso readeth, let him, understand)… then let those who are in Judea flee to the mountains…” (Matt. 24:15).

As you read this article, there are a number of Jewish movements in Jerusalem that have been making attempts to erect a third temple. It’s rare that a month passes by and there isn’t some kind of activity happening on the Temple Mount. These are not Christian movements, and their intention is not to fulfill Daniel’s as well as Jesus’ prophecy. In fact, they don’t even believe or accept them, yet they are adamant that a third temple has to be rebuilt in order for them to truly worship YHWH.

Brethren, we are living in interesting as well as intriguing times. Given the prevailing atmosphere on the Temple Mount these days, and despite UNESCO’s resolution in October 2016 that the holy site belongs to the Muslims, is the fulfillment of abomination that makes desolate spoken of by Jesus Christ just around the corner? Remember Jesus Christ warns the saints to “watch and pray,” as we know not the hour when the Son of man will return in great glory and honour to establish His everlasting Kingdom.  Keep watching and praying!  For more on this subject. download FREE our booklet Daniel’s ‘Seventy Weeks’ Prophecy.