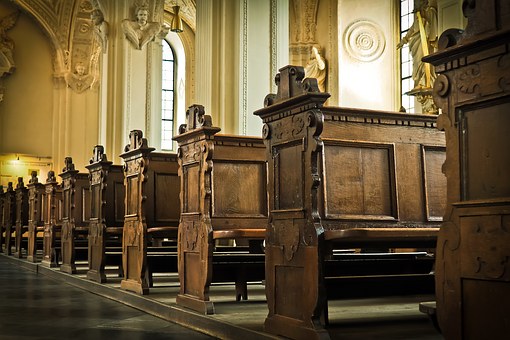 If Jesus Christ walked into your church today, would he recognize it representative of the one He founded on the Day of Pentecost?

Have you ever wondered what the apostles Paul, Peter, James or John or all of them for that matter, would construe if they ever walk into Christian churches today? Could they recognize the church they left behind in the first century?

Think about it. These were the sent men of God. They wrote the books that compile the New Testament we use as part of the worship of The Almighty, and they knew the Word of God. They left behind books upon books, letters upon letters of teachings and doctrines and now they have returned in the 21st century to examine what they had left behind. Let’s take a look at what they left behind.

First of all, let’s get this straight from the Word of God. Luke 24:53 tells us after Jesus’s ascension into heaven, his followers “were continually in the temple praising and blessing God.”

It was in the temple they learned a lot from their Master Jesus Christ. This is what we know from the scriptures Matt. 28:20 that Jesus told his disciples to teach the people “to observe all things whatsoever I have commanded you and, Lo, I am with you always, even unto the end of the age.”

As far as we can glean from the scriptures, the first century believers stuck to their Hebraic roots. That, one can understand, because they were following the Hebrew bible, culture and religion. The Holy Bible is a history, instruction book, and religious text of the Hebrew people and their God. Gentile nations were only “grafted,” later on after the sacrifice of the only beloved Son of God for the sins of the world.

Let’s face it, and there’s hardly any excuse one can use, as many attempt to erroneously do, but the Christians of the first century were Sabbath keepers. Sunday worship didn’t start officially until the third century although there were pockets of believers who might have started as early as around 90 A.D.  The scriptures that some of our prominent preachers of the day use to justify Sunday worship in the first century, namely Acts 20: 7; 1 Cor. 16: 1-2; Rev. 1:10, and a few others, are all proof texting to support a belief that has no biblical support. Closer examination without any biases will reveal these texts  had nothing to do with Sunday worship. It is interesting to note all references in the Holy Bible to “first day of the week,” has the word “day” in italics, which means it was not in the original, but that’s for another story.

The most authentic period in church history is the first century. The followers of Jesus didn’t come together on the Day of Pentecost, the birthday of the church, for a Sunday church service as many of our preachers teach. They were there because they followed the Hebrew tradition of observing the biblical festivals of Lev. 23, which the God of Heaven describes as “my feasts,” not a feast of Israel or the Jews as many teach falsely. They were there to observe the high holy day of the Feast of Firstfruits or Pentecost, one of the seven annual festivals of God in Lev. 23 given to humanity to observe in his honour. What festivals do Christianity have today to honour God? More on that later.

Sunday worship did not begin at Pentecost. That is false. Pentecost always falls on a Sunday, going all the way back to the time it was given in Lev. 23. Another argument is that the resurrection of Jesus on Sunday justifies changing the Sabbath to Sunday. Even if that were the case, on whose authority God’s seventh day, which he sanctified or set apart for holy use, was changed to Sunday? Jesus gave no such command and not one of the apostles observed Sunday as a day of worship. If He was the one who sanctified it, then naturally he would have been the one to change it, but he didn’t.

The first century Christians or the primitive church kept a seventh day or Saturday Sabbath; they observed the biblical festivals of Lev. 23; they kept the food laws, abstaining from pork, shellfish etc., baptism by immersion, the kingdom of God coming to earth and the Kingdom of God would be established on Earth, not in heaven. In fact, there was wide expectation that the kingdom of God would have been established on Earth in their time. They didn’t teach about an ever-burning hellfire because they understood Gehenna (one of the words translated hell in our bible) to be a literal place, a garbage dump outside Jerusalem where Jesus made references to in some his sermons. They believed Jesus was very God and they followed the laws of God, knowing they didn’t offer salvation, but they taught them how to love God and man and to keep closer to him.

We have often heard how the early church fathers had to fight paganism in the early church. The primitive church of the first century faced challenges with that too, especially when Gentile converts began to add to the numbers. But the question is how does the Christian church today end up with its two biggest festivals – Christmas and Easter – being a whitewash of pagan festivals? What has happened to the true biblical festivals? We know Jesus’ custom was to worship on the Sabbath. He never attended a Sunday service during the 40 days he remained on Earth after his resurrection, which would have been the ideal time to make the change, but Luke 24 tells us they continued in the temple following the teachings.

Paul, Peter, James and John, all the apostles and disciples would ask the Christian church today what is Christmas? Why have you disregarded a festival such as The Feast of Tabernacles and embrace a pagan festival such as Christmas? You cannot whitewash a pagan festival with all its original intent, and then call it Christian, especially when God gives you a festival, which you call Jewish. What’s wrong with being Jewish anyway? Wasn’t Christ a Jew? Did he say, “salvation is of the Jews?” Who did he give all his laws to? Wasn’t it Israel? Surely, he didn’t give any law to the Gentile, so even “thou shalt now murder,” is a Jewish law. Does it mean because you are not a Jew you shouldn’t abide by it? What happened instead was the embracing of strange pagan and Hellenistic practices and calling them Christian. Even some of the early church fathers were so anti-Jewish, it’s unbelievable, a position you would hardly hear from the pulpits today. It’s no wonder the early Christian church dropped just about all the Hebraic tenets for pagan-rooted observances.

These great men of God wouldn’t have recognized a festival called Easter with all the bunny rabbits, eggs and fertility symbols of an ancient pagan goddess Ishtar or Eostre.  They would be surprised to see Christians eating ham at Easter, a meat they’d deem unclean (sorry Acts 10 isn’t about unclean meats. Get the understanding of the passage). It was not for Peter to “rise kill and eat” unclean animals. Instead, these great men of God would expect to see Christians keeping the Passover and eating unleavened bread as they knew Jesus was the “Passover Lamb” and the “unleavened bread of sincerely and truth,” I Cor. 5:7-8). Men like Polycarp stood up for Passover instead of Easter around 150 A.D.

The early followers of Jesus in the first century did not teach a Trinity; that came in the third century, Christmas came in the fourth; Easter came in the second century. They did not teach a secret rapture of the church; that when you die you go to heaven as they themselves heard from Christ’s own mouth that “no man has ascended to heaven.” These men of God didn’t teach about “once saved always saved,” when they heard repeatedly the warnings about enduring to the end in order to be saved, about overcoming sin and how narrow is the way to the Kingdom of God.

There are other teachings that we could go into, however, the challenge for you is to examine some of the popular teachings of Christendom today, and see where their roots are, the bible or somewhere else. A popular televangelist admitted recently, “many of the teachings of Christianity today are indeed pagan.” One would hope it was not mere words and that he would do something about that admission.

The challenge is to prove to yourself this is so and then determine where you stand–god or mammon. Here is one last word from our Lord and saviour Jesus Christ in Matt. 15:9 “But in vain they do worship me, teaching for doctrines the commandments of men.”  May the Great God of all humanity grant you the wisdom to see the difference as we approach the Day of Pentecost, the birthday of the Church Jesus founded and a day that pictures the resurrection (not Easter) and Jesus being the firstfruits of the great harvest of humanity to come. For more on this subject, download FREE our booklet The Church that Jesus Built.