The Dangers of Hidden Agendas 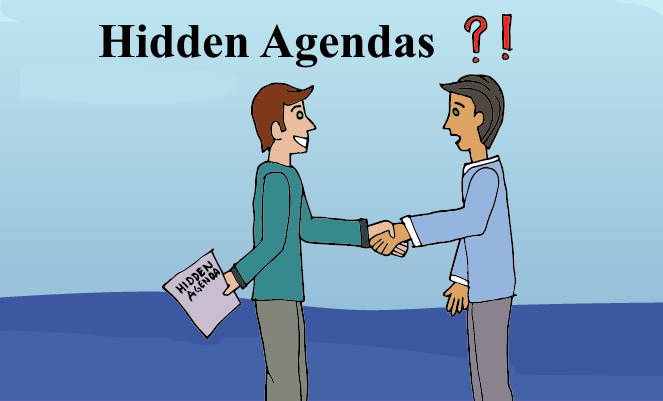 I long for a world where people are “transparent” & “trustworthy”.  In today’s world we increasingly sense some unscrupulous soul is trying to manipulate us for their own selfish reasons & … it can cause you to lose faith in humanity.

A “hidden agenda” refers to:

– private goals that people may be pursuing, which they feel would not be accepted if made public

More specifically, if you say that someone has a hidden agenda, you are criticizing them because you think they are secretly trying to achieve or cause a particular thing, while they appear to be doing something else.

Be aware that hidden agendas exist in almost all situations.  It can be physically painful to watch newscasts where a politician is asked a specific question – and will not answer it!  Instead they switch to rehearsed “talking points” of what they are “allowed” to say.  By sticking to the talking points, the person will not accidently divulge hidden information or secret reasons behind their REAL goals.

Hidden agendas go back to the first days of man with Satan’s deception in the Garden of Eden – Satan’s motive  was NOT to make mankind wise … but instead to have mankind reject the instructions of God!

Another scriptural example of a hidden agenda involves the defiling of Jacob’s only daughter Dinah.  In Genesis 34 she is raped by a Canaanite prince who ultimately wants to marry her.

Gen 34:7  And the sons of Jacob came in from the field when they heard it; and the men were grieved and very angry, because he (the Canaanite prince Shechem) had done a disgraceful thing in Israel by lying with Jacob’s daughter, a thing which ought not to be done.

Scripture goes on to show Jacob’s son’s “spoke deceitfully” by agreeing to the marriage … as long as these Canaanites were circumcised.  The Canaanites ALSO had a hidden agenda because this marriage was (verse 23) an opportunity to get all of Jacob’s land & animals via the marriage.  Next …

Gen 34:25-26  Now it came to pass on the third day, when they were in pain, that two of the sons of Jacob, Simeon and Levi, Dinah’s brothers, each took his sword and came boldly upon the city and killed all the males.   And they killed Hamor and Shechem his son with the edge of the sword, and took Dinah from Shechem’s house, and went out.

Jacob’s family benefitted from “taking the spoils” from this community – But scripture called their hidden agenda to be “speaking deceitfully”.  It is a scriptural value to speak the truth, the whole truth, and nothing but the truth … No one likes to be deceived, and scripture calls it “speaking deceitfully” if your words are crafted to deceive.  Our goal SHOULD BE to be open and honest and fair in our dealings – People can’t communicate and have the best ideas rise to the top in discussions … if the real motives and real desired outcomes are hidden.

Some might cynically say … if you want to spot a “hidden agenda” look to see if someone’s lips are moving!  (ie ALL communication has hidden motives!) but … in reality, to spot someone with ulterior motives you might look for:

– The conversation quickly becomes about, and stays about, them.

– They constantly revisit a certain subject.

– They have oversized reactions to certain suggestions.

Sadly, THIS society has university training – existing for many years now – to teach (in social psychology, etc) … how to manipulate people, how to use rhetoric to push ideas onto people, how to use words and images to deceive.  In many cases it is not a fair fight as the manipulation is unknown by those being deceived.  If our eyes are open to know that this deception is “out there” … we can help spot it via a couple simple points:

Common sense is under attack and not that “common” anymore … we need to invest extra time and effort to explore when things “don’t seem to make sense”.